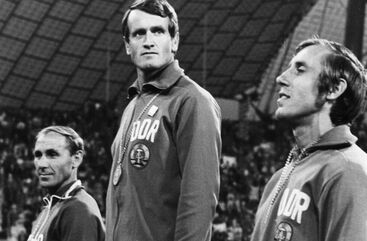 Peter Frenkel (1939) was a German race walker.
In the 1970s, Peter Frenkel represented East Germany.
In 1972 Olympic Games, he won the gold medal in the 20 km Race Walking.
He used a decompression chamber belonging to the state airline Interflug in training for the 1972 Olympics, so as to simulate the effects of altitude training.
In 1976 Olympic Games, he won the bronze medal in the 20 km Race Walking.
Peter Frenkel served in the East German Army while training, rising to the rank of Major.
After finishing his racing career, Frenkel became a well-known photographer in East Germany.